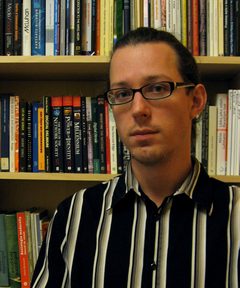 Born 2.10. 1980 in Znojmo. 1999-2005 master’s study at the Department of Sociology of the Faculty of Arts, completed with the diploma thesis “Sociology and Sociotechnology: The Social Structure of the Internet”. Associated master’s study of pedagogy ended in 2005 with the thesis “Using Didactic Constructivist Procedures in Optimizing the Teaching of Sociology”. Winter semester 2007 study stay at Kansas State University, Department of Sociology, Kansas, USA. 2008 graduating from the Research Skills Workshop at the University of Liverpool, UK. 2008-2009 research scientist at the Institute of Moral and Political Philosophy of the Academy of Sciences of the Czech Republic, since 2008 assistant at the Department of Sociology of Charles University. 2005-2013 doctoral studies at the Faculty of Philosophy and Arts of the Charles University, completed with the defense of the dissertation thesis “Exploring the social conditionality of the current way of technological development”. A member of the World Internet Project and a representative of this project for the Czech Republic. In the years 2013-2015, the project developer “World Internet Project – Czech Republic II: Analysis of Social and Political Aspects of uneven Internet Usage” (GA13-21024S)

From the compulsory pension, he participates in the courses of General Sociology I-III, Introduction to Sociology for Psychologists and Sociology of the Media. Other regular recurring courses include Social Networking in Practice, Internet and Society, Theory of Diffusion of Innovation, Sociology of Mass and New Media.

Since 2008 assistant at the Department of Sociology, since 2013 assistant professor

A member of the Czech Sociological Society

Member of the Association of Internet Researchers